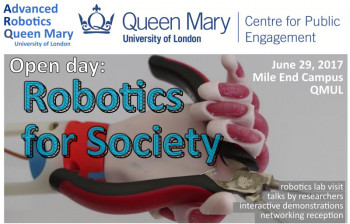 @ Queen Mary (ARQ) is inviting to its day of inauguration. We will be showcasing QMUL's varied and exciting robotics activities and hear from our researchers about their most recent advancements in their areas of interest - highlights include soft robotics, flying solar-copters, micro swarm robots, articulated prosthetics for children, robot co-workers for the factory environment, tactile sensing, haptic tele-operation, wearable robots and much more. The event is open to everyone with an interest in the growing field of robotics, be it just curiosity or your professional interest in robotics. On the day, you will see the newly opened robotics laboratory, be able to attend a range of talks by the experts on applications of robotics and meet the Queen Mary research faculty during the networking reception in the historical Octagon hall of QMUL. The event will take place on Thursday, June 29, 2017 at QMUL Mile End campus in London, UK.

The day will start with demonstrations in the  robotics laboratory space and will continue with our public engagement talks and interactive demonstrations from QMUL researchers in  the Octagon hall. The event is a part of the UK Robotics Week and is co-sponsored by the Centre for Public Engagement, the School of Electronic Engineering and Computer Science (EECS) and the School of Engineering and Materials Science (SEMS) of QMUL.

Abstract. Autonomous robots are under active research and scrutiny, because they capture the interest and imagination of large communities and have great potential impact on lifestyles, occupation and societal organization. Since the road to autonomy is long and difficult, it is likely that specific sectors, mostly professional, will lead the way by gradually introducing semi-autonomous features into existing robotic products. As it happened in the past, robotic surgery is a candidate to lead this process because it addresses a very small market segment, its users are experienced and sophisticated professionals, and there is a demand of novel features in surgical robotic products. In this talk I will discuss some of the motivations for the introduction of autonomous robots in surgery and in other fields, and the many technical challenges that need to be overcome. Since ethical and social aspects of robotic autonomy will determine the acceptance of this new technology, I will also report on the on-going discussion among the stakeholders about introducing autonomous robots into the job market.
Biography. Paolo Fiorini, received the Laurea degree in Electronic Engineering from the University of Padova, (Italy), the MSEE from the University of California at Irvine (USA), and the Ph.D. in ME from UCLA (USA). From 1985 to 2000, he was with NASA Jet Propulsion Laboratory, California Institute of Technology, where he worked on autonomous and teleoperated systems for space experiments and exploration. In 2001 returned to Italy at the School of Science of the University of Verona (Italy) where is a Full Professor of Computer Science. His research focuses on teleoperation for surgery, space, service and exploration robotics, with particular emphasis on the theoretical and practical problems of high safety applications, such as space and surgical robots. In 2001 he founded the ALTAIR robotics laboratory, which has been awarded several EU and Italian grants, including projects on robotic surgery, such as Accurobas, Safros, Isur, and Eurosurge. In 2009, he founded the company Surgica Robotica for the development of a new generation of surgical robots that received the CE certification for abdominal surgery in 2012. He is an IEEE Fellow (2009).